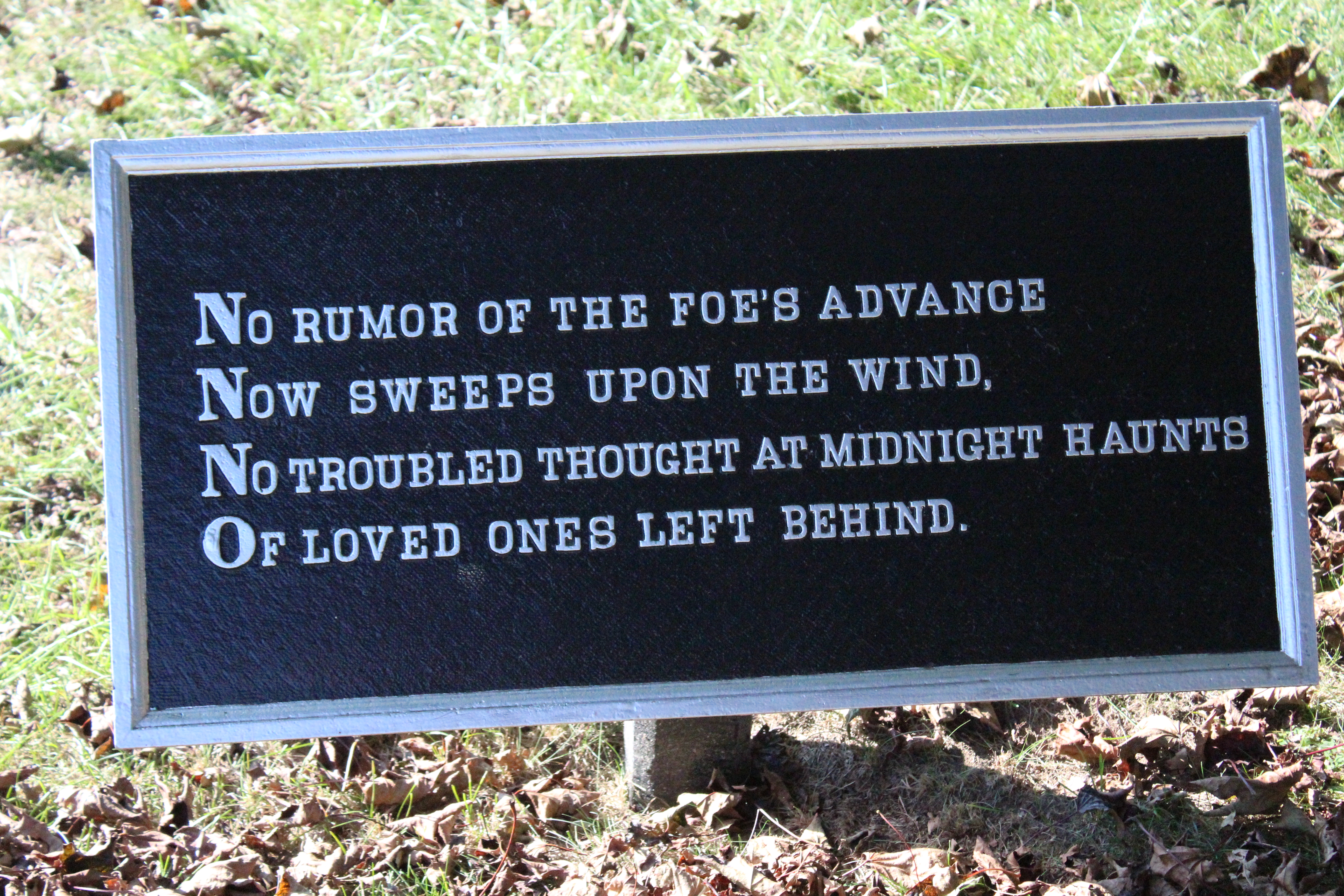 Gettysburg. At the very top of my list of things to do in Pennsylvania was to stand where Lincoln delivered the Gettysburg Address and read it aloud. The solemness of the grounds is loud and overwhelming and peaceful, except for the screaming and crying of my three year old who only wanted to see the first cannon in the park not the other 50. . .

My five year old on the other hand is at the perfect age for first exposure to such a huge topic. He understood the mass, not to its fullest, but to some degree. There were moments when I could see him calculating what exactly happened in his head and still not understanding the hatred behind it. I hope he never does. We studied the civil war in depth back in June, he knew who was fighting and why, but this, this was big.

If you haven’t been to Gettysburg, or are planning a future trip, there is so much to see. I cannot wait to go back and explore more of the town. The National Park portion is vast, you need a car or tour bus. The battle fields are spread out over 25 miles of road surrounding the center of town. IT IS ALL FREE!!!!! Nothing better than putting history in the hands of the people for FREE! GO!

Everything is hands on, child friendly, open spaces, historic (all the restaurants, shops and hotels are original to the 1790s). But. . .My favorite part was the covered bridge.

I’ve seen Sach’s Bridge on post cards of Pennsylvania my whole life and boy did we go on a wild goose chase looking for this guy. It was so worth it. It has also been published in five books as being one of the most haunted structures in Pennsylvania. Considering the 10’s of thousands of people that were killed at Gettysburg, that’s really saying something. It was beautiful and full of locals fishing, which was a nice change from the tour buses of the battlefields. 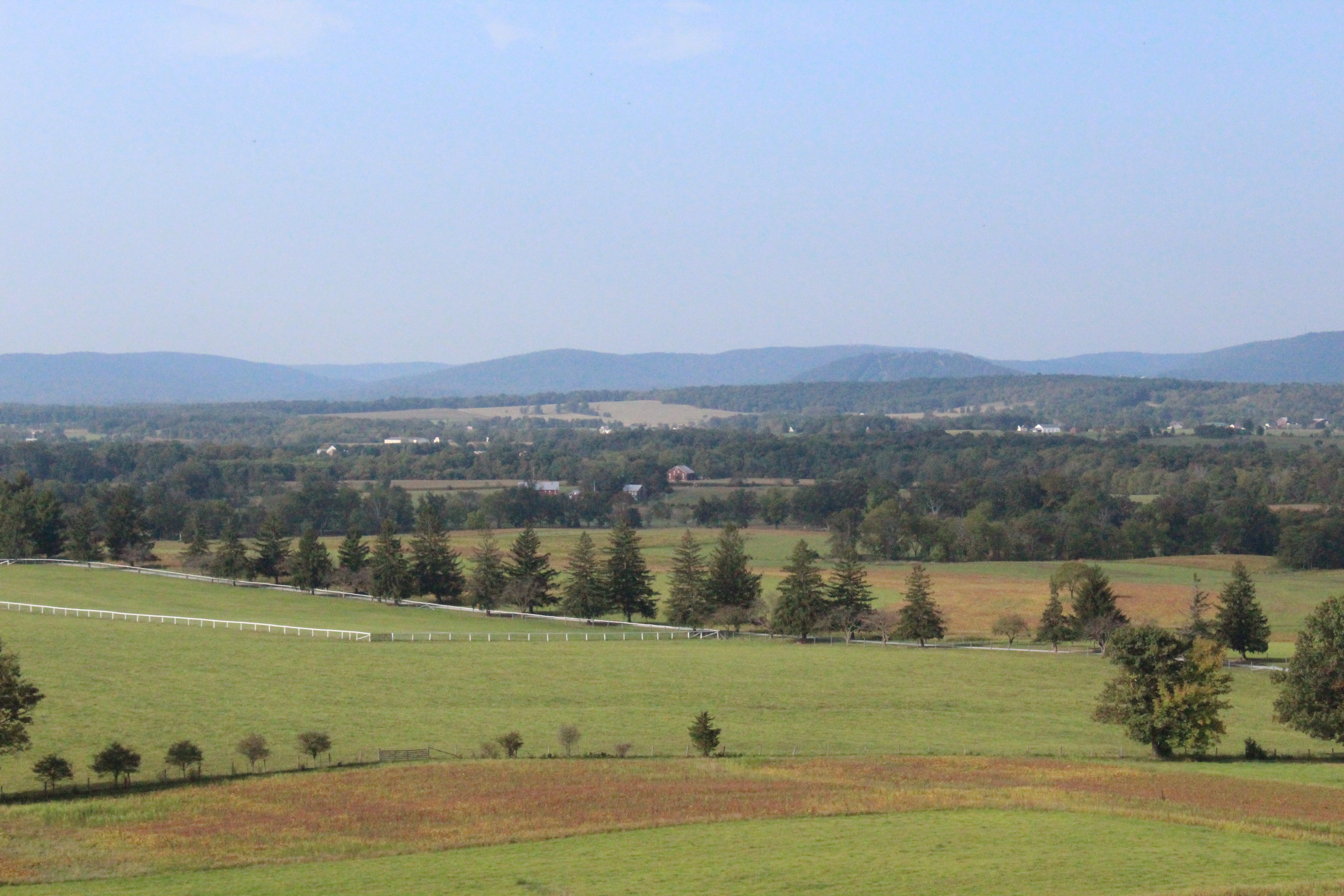 We climbed to the top of the observation tower and there you can see exactly how the battles of Gettysburg unfolded on July 1, 2 and 3 of 1863. I was able to point to different sections of fields and peach orchards and show Lux exactly where the armies approached and flanked and clashed. That was a surreal moment for me. A moment that fueled me to continue this journey with my children. On the days that homeschooling seems impossible I can reflect on this memory of what middle school, high school could look like with an engaged child learning in the place it happened.

“Four score and seven years ago our fathers brought forth on this continent, a new nation, conceived in Liberty, and dedicated to the proposition that all men are created equal.

Now we are engaged in a great civil war, testing whether that nation, or any nation so conceived and so dedicated, can long endure. We are met on a great battle-field of that war. We have come to dedicate a portion of that field, as a final resting place for those who here gave their lives that that nation might live. It is altogether fitting and proper that we should do this.

But, in a larger sense, we can not dedicate

we can not consecrate

we can not hallow this ground.

The brave men, living and dead, who struggled here, have consecrated it, far above our poor power to add or detract. The world will little note, nor long remember what we say here, but it can never forget what they did here.

It is for us the living, rather, to be dedicated here to the unfinished work which they who fought here have thus far so nobly advanced. It is rather for us to be here dedicated to the great task remaining before us that from these honored dead we take increased devotion to that cause for which they gave the last full measure of devotion that we here highly resolve that these dead shall not have died in vain that this nation, under God, shall have a new birth of freedom and that government of the people, by the people, for the people, shall not perish from the earth.” 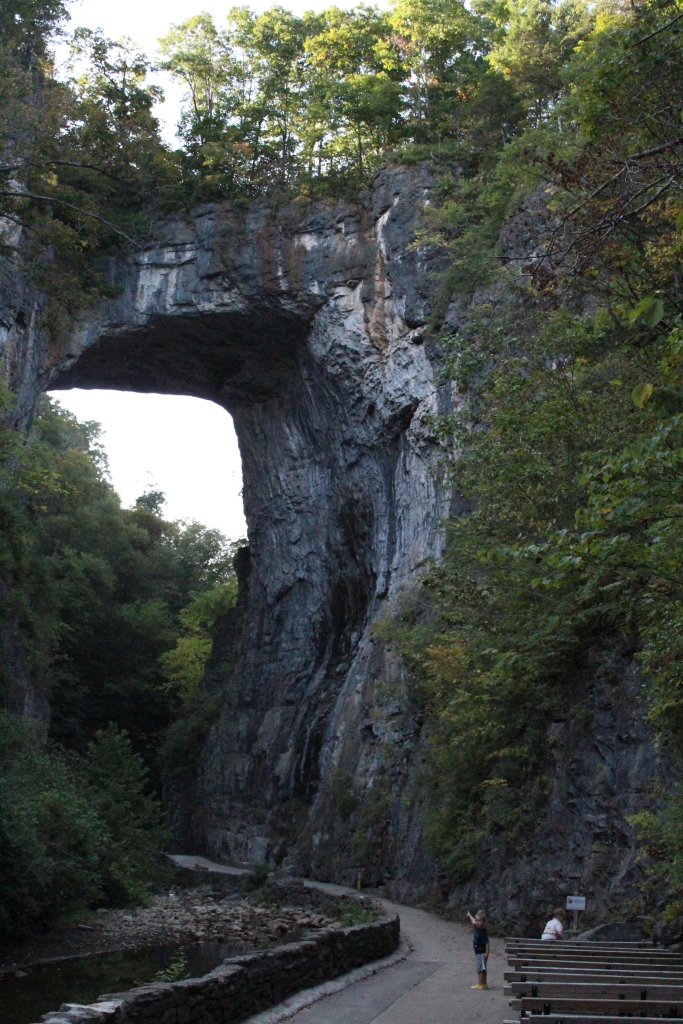 We recently went on a little road trip. We did not cover much distance in mileage, but we saw so much! We drove from North Carolina to Virginia, Virginia to Pennsylvania and back again. When you pass through Natural Bridge, VA the natural bridge and natural bridge caverns are worth your time. A land full of natural beauty, millions of years in the making. Some words of advice if you decide to visit and stay in the area; the hotels are limited, the available food resources are almost non-existent so stock up when you go through Lynchburg.

The Natural Bridge Caverns were a great “first exposure” cave system for my budding scientists. The cave system is well lit and your guides are local college students, most of whom have been working in the caverns since high school. The Natural Bridge and the Caverns are about one mile apart in a small town with almost nothing else around.

Carter Mountain Orchard. An old favorite of mine from when we were stationed in Quantico, VA. This was my third visit to the orchard, the last time I was pregnant with our second son. We met our old neighbors here for some much needed friend time and apple picking. My dear friend and I wrangling 8 children 9 and under up the side of a mountain was an entirely different view. . .

*Fun Fact: Carter Mountain was gifted to the family from their neighbor Thomas Jefferson and has been open to the public as an orchard since 1912.

Monticello. Thomas Jefferson’s architectural masterpiece and land where his, over 200 slaves, made all of their own bricks and nails for all the buildings once on the property. In previous years I have toured the house, which is worth it, but this time with only two sets of adult hands and 8 children we opted to run the grounds instead. The grounds are littered with exotic flowers and vegetables sowed from seeds from the 1790s. It is incredible to see a legacy as expansive, in ideas as well as children.

Virginia has so much to offer. If you don’t mind crowds you can travel closer to Washington D.C. and stop at hundreds of civil war sights, battlegrounds and plantations. If you prefer a Shenandoah Valley view head toward Western Virginia, Jefferson did.

With all the evil rearing its head in our country, particularly in Virginia lately, showing my children where it all started (slavery, plantations, Gettysburg) and what it meant to be a slave in this area during that time, helps set the stage for the tough conversations I have to have whilst raising children in this society. I do not hide truths from my children, I expose them, so history doesn’t continue to repeat itself. 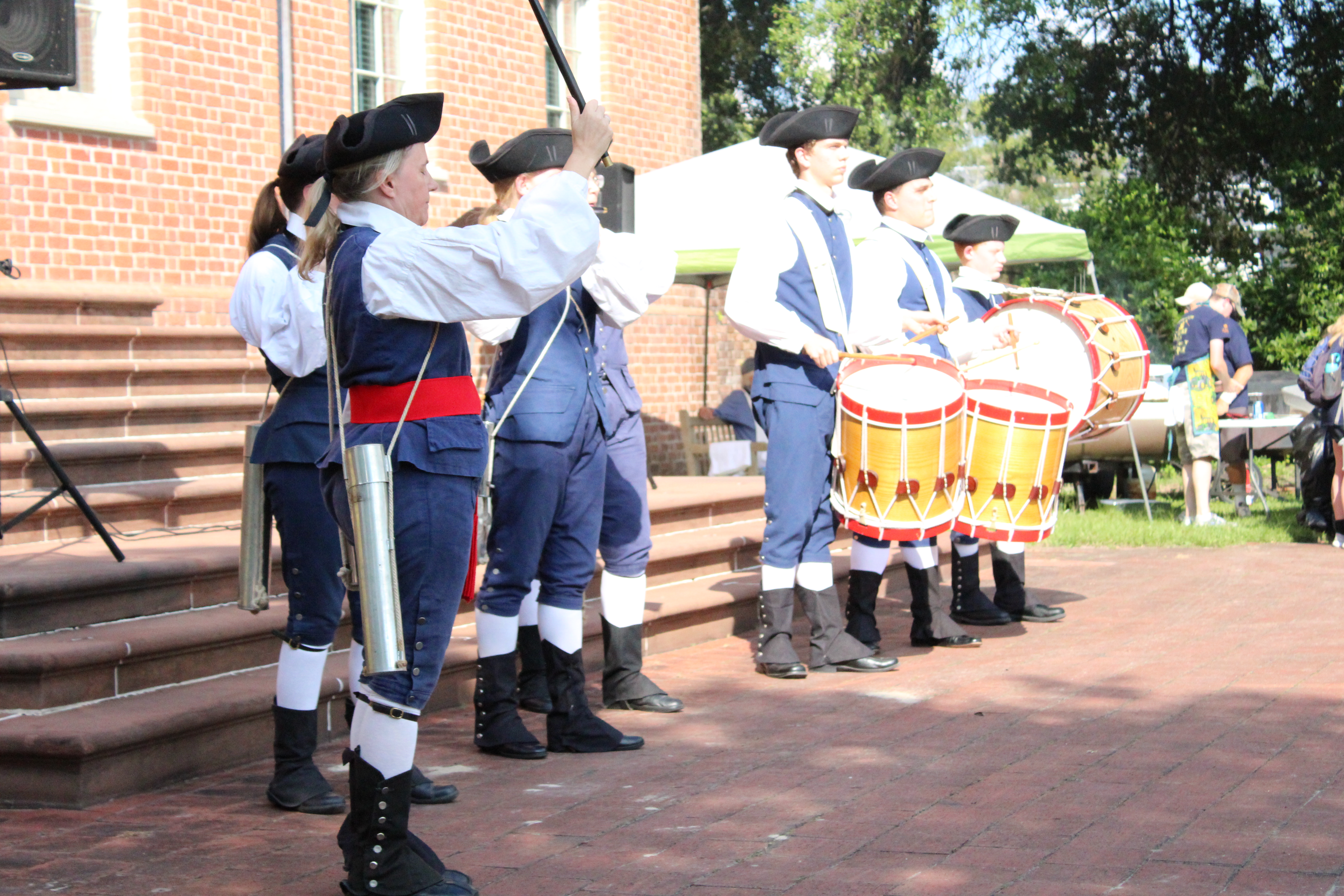 Twice a year, Tryon Palace opens its lawn and gardens to patrons for camping. Tryon Palace was the first Royal Government seat in the thirteen colonies under King George III and built in the late 1760s. The event was amazing! I was so impressed by every single thing that the organization did. When we arrived I was questioning my ability to “camp” with my mother (visiting from Missouri) and my three small children, one who is awake nursing most of the night and teething miserably. Within minutes of our arrival a volunteer came over with a garden cart and begins loading our things and hauling it to the lawn! I was pleasantly surprised. I tried to sit Atlas (the baby) down and he of course started screaming so this volunteer and my mother pitched the tent. They both deserve a cookie. Speaking of sweets, I purchased our camp site (it’s a fundraiser for the palace) for $60 and with that money I received loads of help from volunteers for set up, shoving air mattresses into small tents and break down. It included our dinner, which was really good, Smores, Bounce houses, Colonial era games, a magician, Storytellers, Sing a longs, plant identification glow stick walk, a mini militia, a wonderful drum circle, breakfast AND PEACE AND QUIET.

At 10 pm they announced lights out and for about twenty minutes I sat in silence staring up at the stars, my children slept, the children and families around us respected the rule and were quiet. . .The only movement was the airplane I mistook for a star. The blazing September sun gave way to a cool Trent River breeze and suddenly we were successfully camping.

Being out with children is hard. It just is. I do not believe that it comes easily for anyone, definitely not me. The most difficult part about camping with these boys was that 9 month old, crawling Atlas puts EVERYTHING in his mouth. He ate leaves, rocks, paper, bugs, you name it. 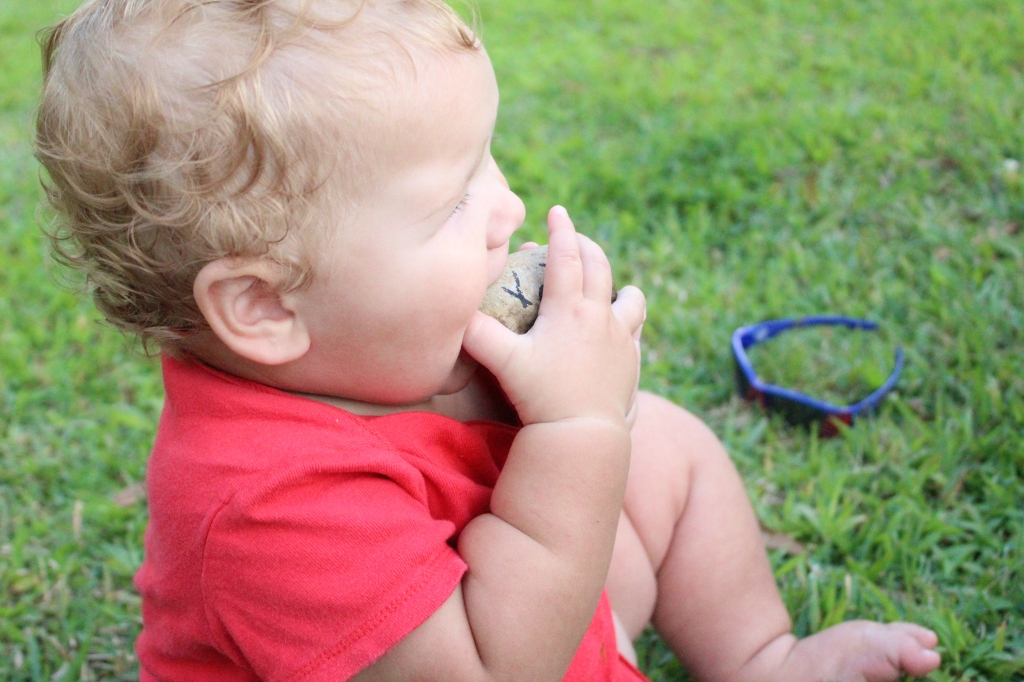 I do it anyway because when a man in colonial garb hands your weapon obsessed military child a mock musket and bayonet he comes to life. His language is spoken and he is plugging his ears for a pretend cannon fire against the British. Learning is taking place and History is coming alive for my child. My husband and I have a pretty extensive love for history, if you ever want to hear the whole story pitch your tent next to ours at the next Lanterns on the Lawn https://www.tryonpalace.org/ and say yes to adventure.

When Greg and I found out we were pregnant, I in graduate school and he working and waiting for a military waiver, we could have never imagined the life we are leading. I would have laughed if someone would have told me that 6 years later I’d be spending my days homeschooling, doula-ing and washing flight suits.

That’s a good portion of my day, but the moments are infused with so much more than that and opportunities appear everywhere if you’re willing to say YES! Many of our followers probably believe that the concept of world schooling our kids was a recent and rash decision, but it was not.

Some people have financial based prenuptials, but Greg and I’s was of a different nature. When Greg proposed I was very forthcoming in what I wanted for my life. I have been a travel junky for as long as I can remember, I got degrees in subjects that encouraged exotic travel, so the idea of marrying a military man and having a brood of military babies and being all domestic was not on my agenda.

“Every time you leave the country I am too.”

With a chuckle and nod he agreed and I have held him to it. This is where it started folks. Pre-babies, pre-four moves, pre-homeschooling, pre-hippie, pre-mother marine corps, pre-homebirths. It started here. This is what this blog is about. My mainstream husband marrying a gypsy and living both lives simultaneously with as much Grace as we can muster. All while raising three young boys to be the truest version of themselves. The blog of our daily adventure driven, slightly domesticated, lives starts here.